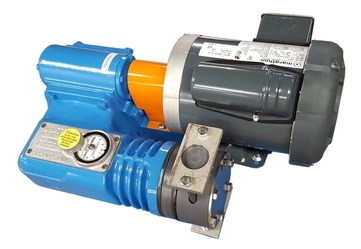 Mechanically actuated metering pumps, are driven by a motor, worm gears, drive shaft, eccentric and piston. The motor speed is first slowed or reduced down to a desired stroking speed using worm gears. These worm gears are what will then turn the drive shaft at a desired speed and the drive shaft will turn an eccentric which is a type of cam; this ultimately provides the stroking motion of the piston. Madden pumps, as an example, have a molded rubber diaphragm with a screw on the back side of it that is directly fastened to the piston. The forward and reward stroke of the piston directly actuates the primary diaphragm. When the piston is pulled rearward it pulls the diaphragm rearward and that creates a vacuum that sucks liquid into the pump. As the piston and diaphragm move forward liquid is pushed out of the pump.

(Term: primary diaphragm- the diaphragm that comes into direct contact with the liquid being pumped).

Hydraulically actuated diaphragm metering pumps, have the same starting components, meaning they also use a motor, worm gears, and a drive shaft/eccentric/piston of some sort to accomplish the reciprocating motion. However, the piston (usually a plunger) does not come in direct contact with the primary diaphragm. Between the piston and the diaphragm is hydraulic fluid. The reciprocating motion of the piston pressurizes the hydraulic oil which pushes on the diaphragm. 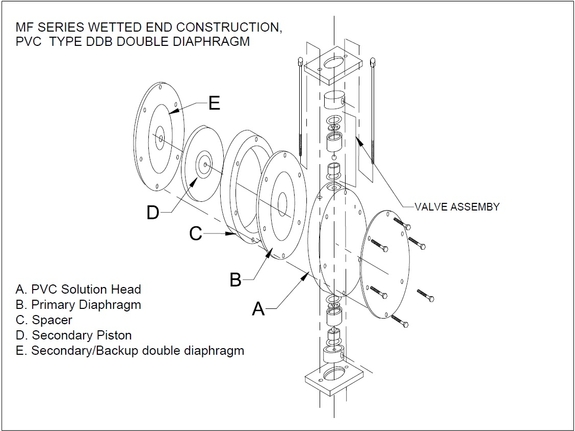 Hydraulically actuated liability: ruptures in the primary diaphragm could cause the hydraulic pump to pump barrier fluid into the product, thus ruining an entire batch of product.

Point being, diaphragms will inevitably fatigue and rupture. There are precautions you take to avoid unnecessary damages (which we’ll talk about later in this blog) including leak detectors and regular maintenance, but nothing can beat the assurance of a dry chamber when it comes to pumping sensitive liquids like pharmaceuticals and food grade liquids.

Example: we recently were brought an inquiry for a large pharmaceutical company who had a costly malfunction. One of their many hydraulically actuated diaphragm metering pumps had a diaphragm reach fatigue; the problem for them was the double disc system used a barrier fluid acting as the hydraulic actuator for the primary diaphragm.

When the primary diaphragm failed, the barrier fluid entered the pharmaceutical product being pumped and ruined the entire batch.

Mechanically actuated diaphragm pumps do not have any fluid between the secondary diaphragm and the primary diaphragm. In this case, it was suggested they take a look at the Madden diaphragm metering pump line. Had this large pharmaceutical company been using a Madden pump with a type DDB double diaphragm construction, their worst case scenario would have been a minor loss in volume of product, not an entire batch being contaminated.

Think of a mechanically actuated metering pump’s construction as the final precaution that will answer every “what if” and “you never know”.

“What if” we somehow overlook replacing the diaphragm just the one time, or “what if” someone accidently forgets to plug in the leak detector switch, and we ruin an entire batch of product… “you never know”.

Well, with Madden mechanically actuated metering pump and a type DDB double diaphragm, you know your answer is only a minor loss in product by volume equivalent to the time the pumps ran with a ruptured diaphragm. And one last advantage, repairing the hydraulic pumps can be messy and complicated, Madden wetted end repairs can be done in 10 minutes with an adjustable wrench.

As discussed earlier, Madden metering pumps equipped with a DDB double diaphragm have a secondary back up diaphragm, a spacer, secondary piston, and primary diaphragm. The secondary diaphragm is there to make sure the liquid being pumped never comes into contact with interior components of the pump, which means only minor wetted end repairs will ever be necessary. 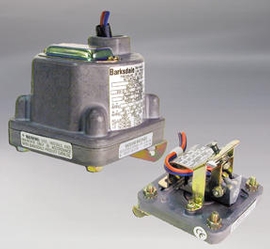 A Madden diaphragm metering pump with a type DDB double diaphragm and leak detecting pressure switch will be plenty to give you peace of mind that your application will never leak or spray dangerous chemicals around the shop floor or surroundings; and if that isn’t enough, remember you can always fall back on the mechanics of a mechanically actuated pump, it will never waste a batch.

If you’re pumping a dangerous liquid, or a liquid that must not be contaminated in anyway, consider a Madden mechanically actuated diaphragm metering pump. They are extremely accurate, consistent, and durable. Our metering pumps are made of aluminum bodies and heavy duty construction for the interior components and everything is made and assembled in the U.S.A.